If there is an American artist whose work, over the last century or so, has amazed you, chances are the Pennsylvania Academy of the Fine Arts has had some role to play in the making of it. Its ongoing “Making American Artists: Stories from the Pennsylvania Academy of the Fine Arts, 1776–1976″ exhibit “explores the role that art has played in influencing our national history and identity over 200 years,” according to PAFA. It reckons with the Academy’s own role in shaping American art across decades, including which artists were elevated and which were shut out.

It’s a show full of iconic imagery that represents the best of American art over the centuries — but what works stand out the most from the 100 on display? We asked

the PAFA curatorial team and art experts who listing their favorite pieces.

Arguably, the most famous fox in American (or perhaps, global) art history appears in artist Winslow Homer’s 1893 oil on canvas, The Fox Hunt. As a band of crows swoop in on a lone fox almost drowning in snow, PAFA’s chief of curatorial affairs Anna O. Marley finds the painting “devastating.” But yet, she said, “…it touches viewers of all ages and backgrounds.” Fun fact: The Fox Huntappears in the show in a brand new frame which allows the viewer to see Homer’s signature, sinking into the snow just like the fox.

Puck on a Toadstool

Sure Harriet Hosmer’s 1856 marble sculpture Puck on a Toadstool, looks like a cherub, but don’t be fooled. University of Pennsylvania’s Jonathan Katz, the country’s founding expert in queer art history, reads the sculpture as a “bratty aggressive child” who is non-gendered. Long before we had the vocabulary to talk of gender queerness, Hosmer moved to Rome and dressed like a man. Puck takes a whole new meaning when seen with a genderqueer lens.

“I’m dying to know who the model could have been,” Dana Byrd, an associate professor of art history at Bowdoin College, said while speaking of May Howard Jackson’s 1899 bronze sculpture Slave Boy. Jackson was PAFA’s first female graduate of African ancestry. Slave Boyis remarkable to Byrd in the way Jackson grants humanity to her model and doesn’t reduce him to his labor and “moves away from the classical pure white marble and makes this sculpture of this young boy in bronze.”

Julio Galvez, originally from Guatemala, trained as a dentist and left his 25-year practice to pursue art at PAFA. He takes inspirations in “code switching” from Georgia O’Keeffe’s 1923 painting Red Canna. Although O’Keefe denied this throughout her career, Galvez reads a strong undercurrent of sexual subversion in the undulant folds of O’Keefe’s painting. It speaks to him as he, a gay man, has had to navigate how and when to reveal his personal truth among professional and personal circles.

We have all seen many portraits of George Washington but did you know that Charles Willson Peale’s version is different? While most portraits show the founding father after the Battle of Princeton, Peale paints him after the Battle of Trenton. What’s more, this is the only painting in which Washington wears his state sword. When at PAFA, be sure to compare Peale’s version to Gilbert Stuart’s — the version we see on our dollar bills.

Arts writer Julia Shipley conducted the interviews for the article 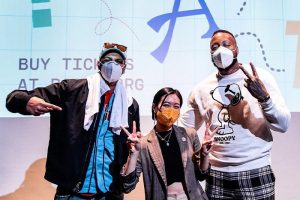 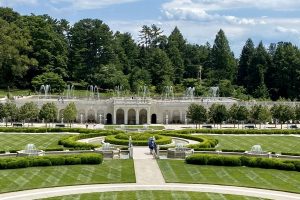